The new combination of unexplored beauty is reached through the delicacy and nimbleness of its details. 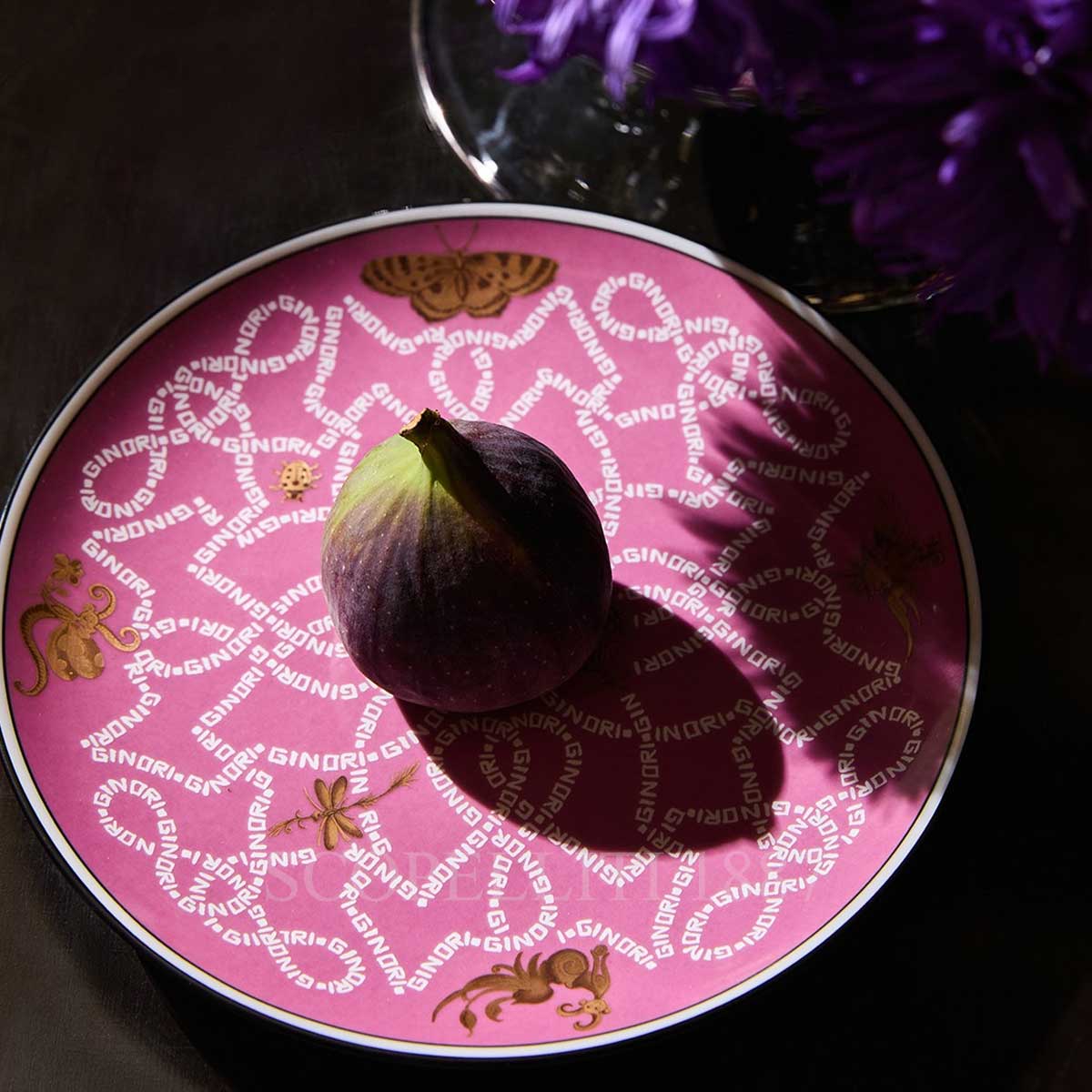 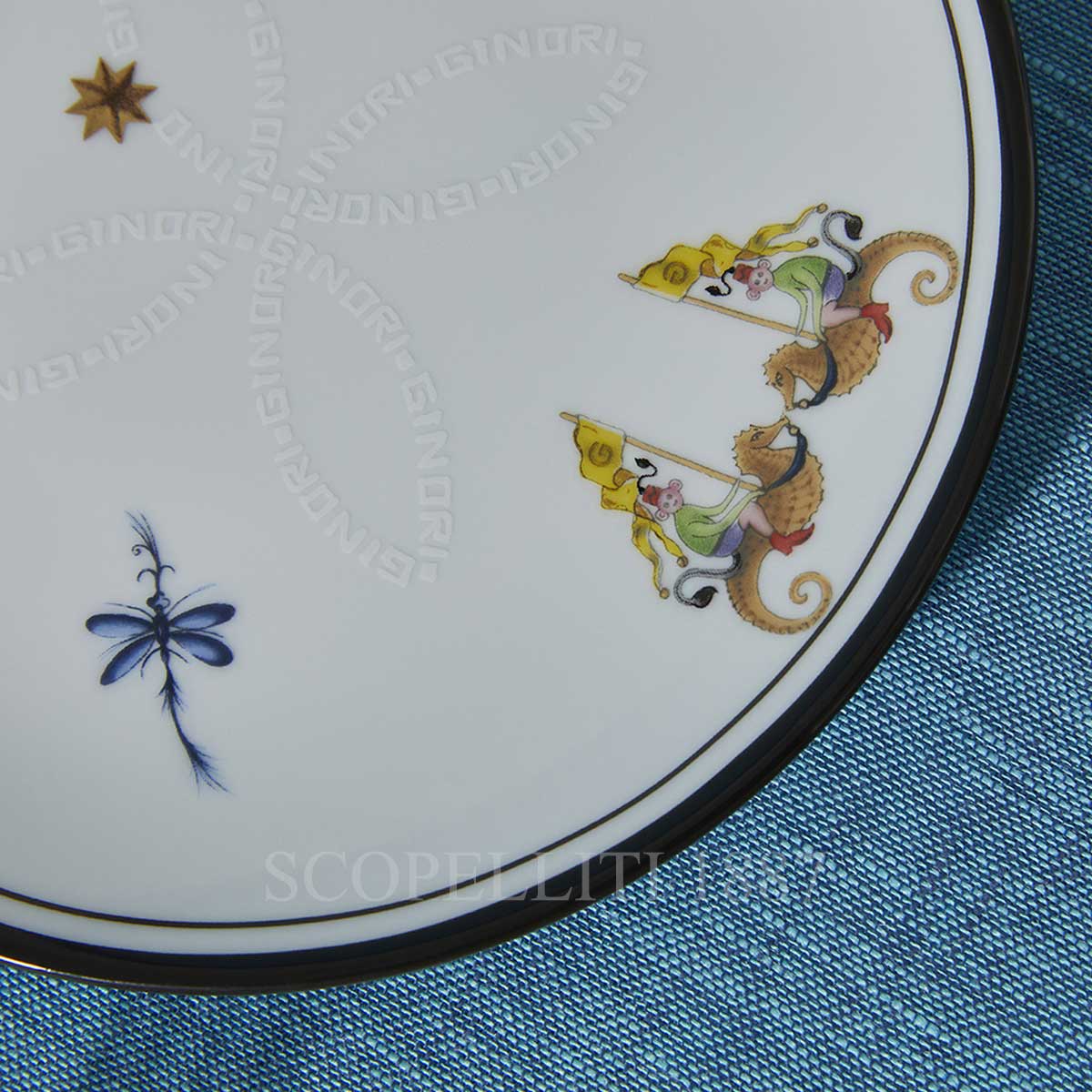 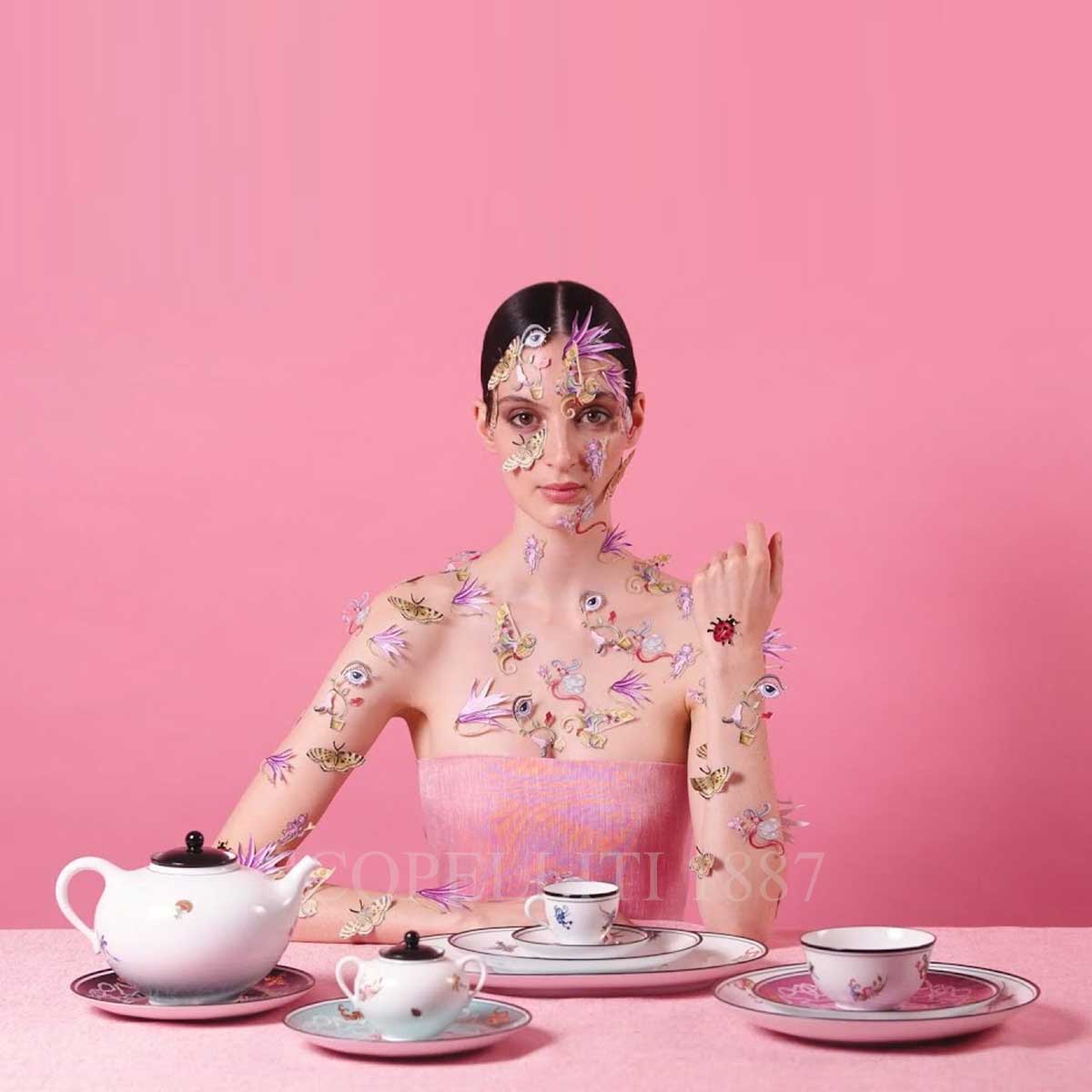 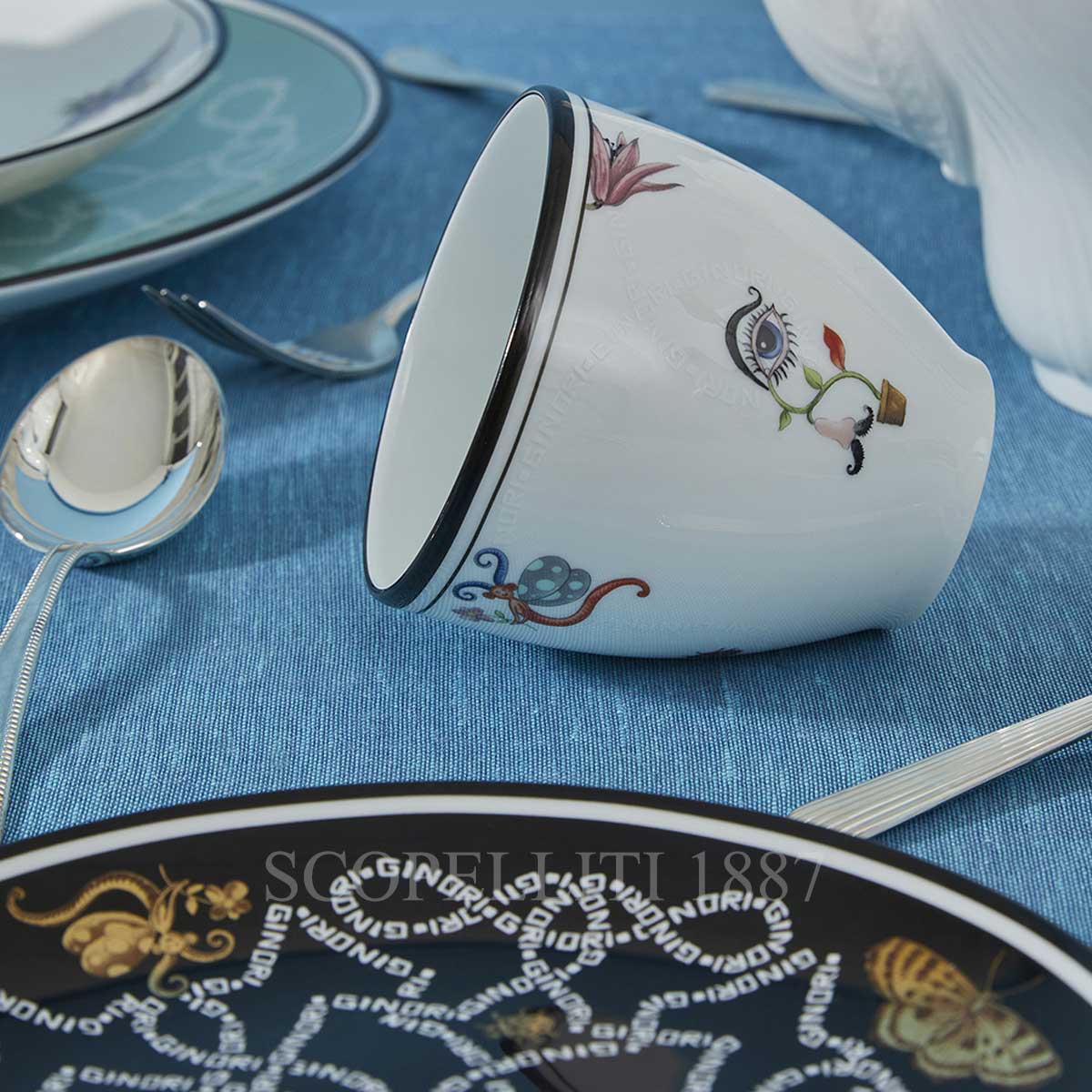 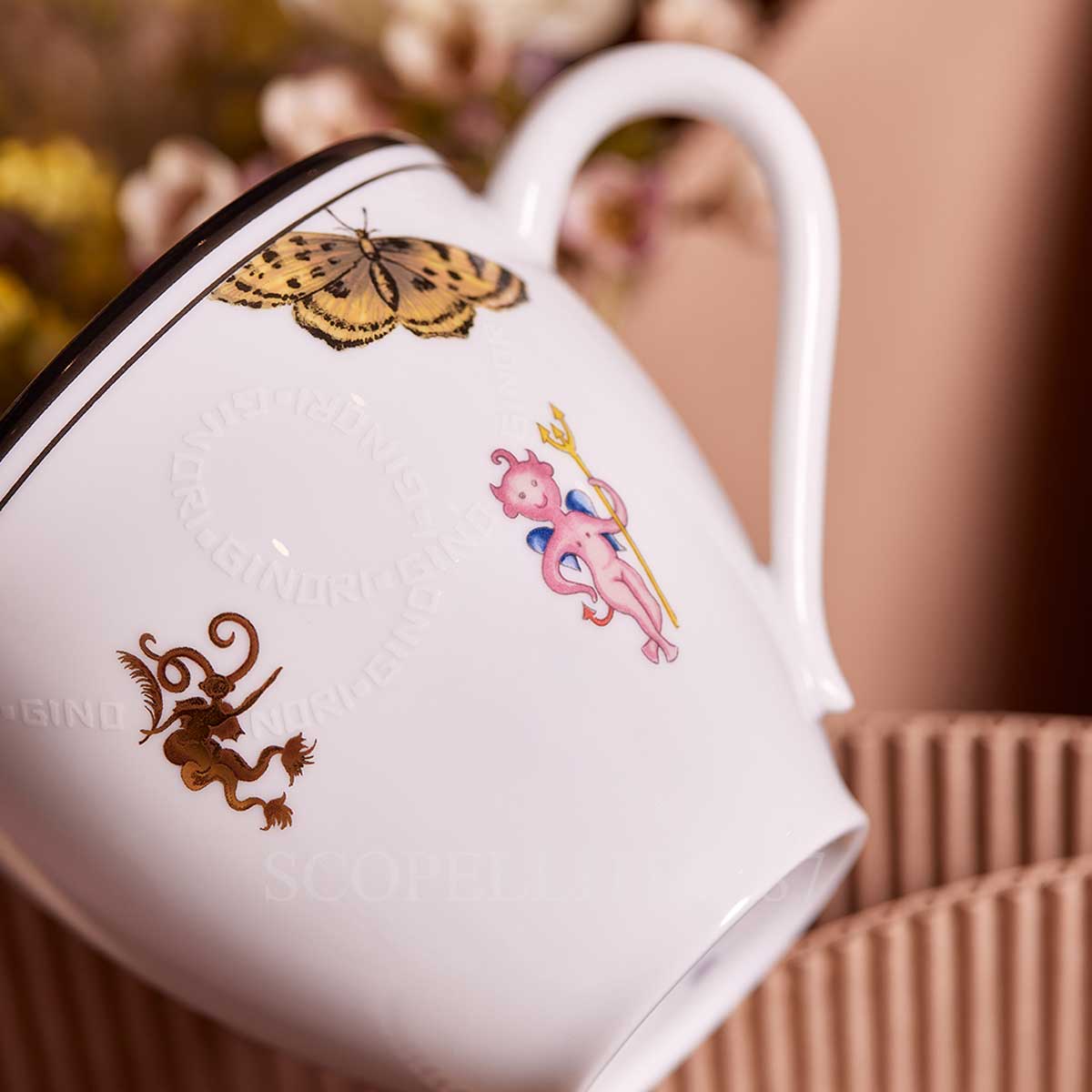 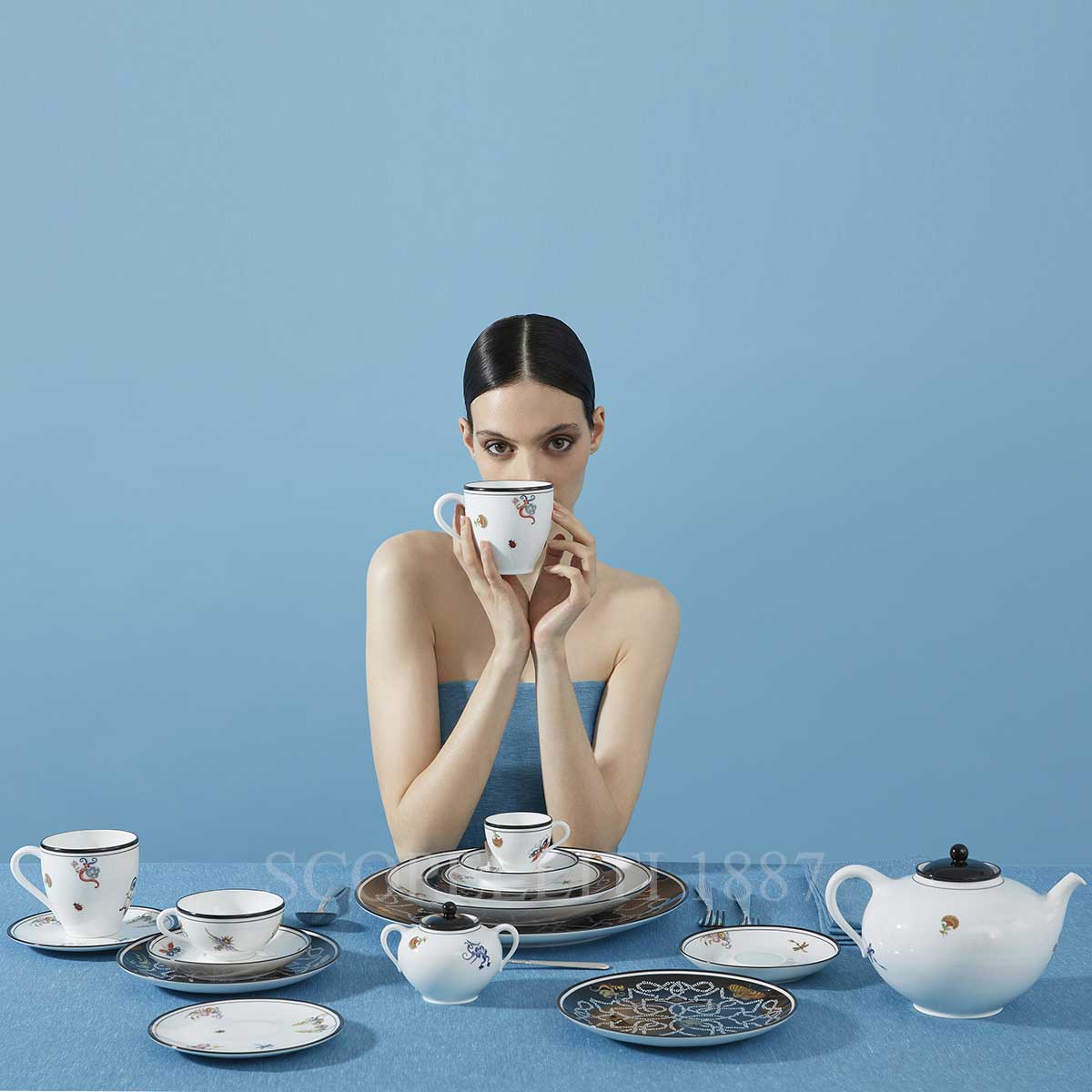 The Ginori 1735 Arcadia tableware is a new porcelain series released by the famous brand in collaboration with a well-known fashion designer and artist Orazio Stasi.

Every single piece of this collection illustrates the world full of fantasies where absolutely everything is possible and the dreams may come true.

The series has everything you need to compose a perfect table setting or some gifts and accessories for home .

The luxurious appearance of this tableware is gained through usage of 18 different colours and the appliance of threading technique.

The  Ginori 1735 Arcadia tableware will convey to you the sense of innate creativity of its fantastic world.

Arcadia  is a place of carefree, happy life, idyllic happiness.

It brings us to the fantastic world of imaginative creatures with pure sense of harmony.

It’s a kind of utopia where every inhabitant leads a simple harmonious life immersed into the majestic nature.

Initially, Arcadia was called one of the historical regions in the central Peloponnese of Ancient Greece.

It took its name from the mythological character Arkas, and in Greek mythology it was the home of the god Pan.

Lately, Arcadia became a metaphor of peaceful land with genuine nature and that is why it became a source of inspiration for the artist.

The most exceptional piece from the whole collection Ginori 1735 Arcadia tableware is undoubtedly the presentation plate.

Its design is really unique as it resembles the fairy tale of the Arcadia idyllic world full of flowers, butterflies and other marvellous creatures.

Each plate has an inscription Ginori that composes wavy lines and covers the whole plate, giving a kind of tactile perception of movement.

The colours chosen for the Ginori 1735 Arcadia tableware presentation plate are pink, aquamarine, white and black. The size of the plate is 33 cm.

The dinner plate is another important element from the whole collection Ginori 1735 Arcadia Tableware. The colour of the plate is total white with contrasting strong black border. Its design consist of 7 fantastic colourful creatures like sea horses, flowers with eyes, strange plants and angels.

The size of the plate from Ginori 1735 Arcadia Tableware is 27 cm and it may be used for any kind of table settings, both formal and informal.

The dessert plate from Ginori 1735 Arcadia Tableware is another richly embellished element. The design of the plate is an exact replication of the presentation plate pattern but of course in smaller version. The diameter of the plate is 20,5 cm and it was released in 4 different shades.

The colours chosen for the decoration of the dessert plates are tender pink, light aquamarine, white and bright black. The peculiarity of this pattern is that the white version has multicolour decorations, while the other three versions are adorned with beautiful goldish colour.

The Ginori 1735 Arcadia tableware bread and butter plate is a pure tenderness. It was released only in white colour with a double bright black border. On the top of it we may find a pair of lovely seahorses, a smiling little devil, a coloured snail and a blue dragonfly with star.

The inscription Ginori this time composes a flower composition. This plate will perfectly fit all of your breakfast moments bringing you a cheerful vibe for the whole day.

The soup plate from Ginori 1735 Arcadia tableware has one of the most simplest design from the whole series. The decoration consists of a total white background with bold black border.

The unique central decoration of the plate is a coloured dragonfly with two big eyes. The plate has a classic Ginori 1735 Venezia shape and the size of 20 cm in diameter.

The oval form of the dish will be more suitable to serve second dishes like meat, fish or some vegetarian variations.

The smallest platter is 22 cm in diameter with Venezia shape.

The largest oval platter is of 33 cm with multiple coloured decorations.

Both plates are made in white porcelain with large black border.

The salad bowl from Ginori 1735 Arcadia tableware collection is really huge. Its diameter is 27 cm and it can be used as well as a deep round platter or even a centerpiece to store some fruits on the summer table setting.

The form of the plate is classic and round with few decorations of fantastic creatures and of course a black border.

The largest one is a soup bowl of 14 cm with capacity of 450 cc. It has a so called Venezia shape with various decorations.

It may be used not only for liquid types of soups but as well for eating fruits or cereals.

The rice bowl is quite small with capacity of only 260 cc but it will be perfect for healthy and light dinners or make-ahead lunches.

The collection includes as well a beautiful gift set that consist of 4 assorted small bowls in finest porcelain.

The collection includes a stylish chopstick holder and a soy dish.

The design of both elements is quite simple: a black border on white porcelain.

A small ladybug on a chopstick holder and a strange flower at the centre of the soy dish complete this unusual decoration.

The Ginori 1735 Arcadia tableware collection includes as well two types of gift sets: a set of 6 chopstick holders and a set of 6 soy dishes.

One of these sets or both of them may be a perfect housewarming gifts for all the lovers of oriental dishes.

For all the tea lovers, Ginori 1735 Arcadia tableware prepared an outstanding gift set of two tea cups and saucers. The design of both elements reflect the basic theme of the series with the depicted strange, little and funny animals on white porcelain background.

The cup has the capacity of 200 cc, while the size of the saucer is 15,5 cm. It will become a fabulous gift for a lovely couple.

The gift set of two coffee cups together with coffee saucers is a stunning gift idea for anyone. Every person is absolutely in love with this invigorating drink and that is why this kind of luxury gift will be absolutely appreciated.

The coffee cup and saucer form Ginori 1735 Arcadia tableware collection has the capacity of 100 cc. The size of the saucer is 12,5 cm.

The Ginori 1735 Arcadia tableware collection comprises as well two pieces that will complete your tea or coffee drinking ceremonies. The series includes a charming teapot together with a sugar bowl in white porcelain. As for the design, this time the butterfly together with fantastic angel become real protagonists of the scene.

The capacity of the teapot is 1,5 lt, while the sugar bowl is 250 cc. Both of these delightful porcelain creations have a Venezia shape with a lid in total black colour.

The porcelain mug from Ginori 1735 Arcadia tableware collection is another excellent gift idea for those tea lovers in your life that prefer this kind of vessel. It may become a complementary gift to some elements from this series or just a small gift for birthday or some other special event.

The plain and classy design of the mug enhance the fineness of its porcelain. The capacity of the mug is 370 cc.

Any question about Ginori 1735 Arcadia Tableware?

If you have any special requests or require further information about Ginori 1735 Arcadia Tableware, Scopelliti 1887 staff will be pleased to assist and advise you. 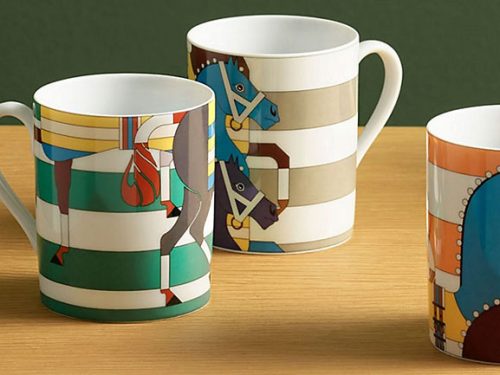 Coffee Mug Guide: How to Choose the Perfect One 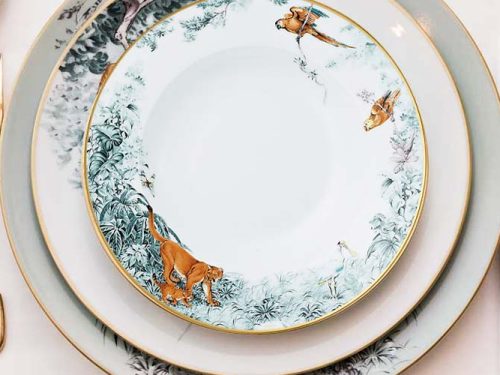 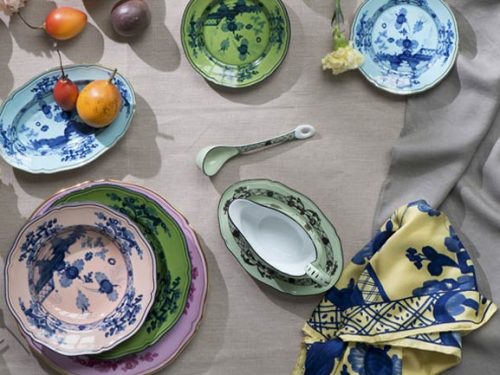 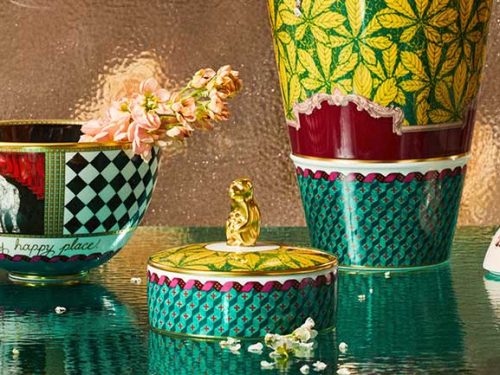 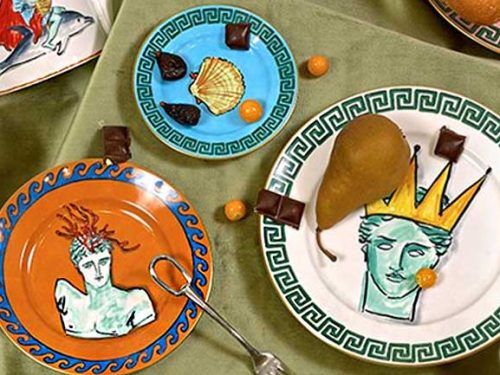 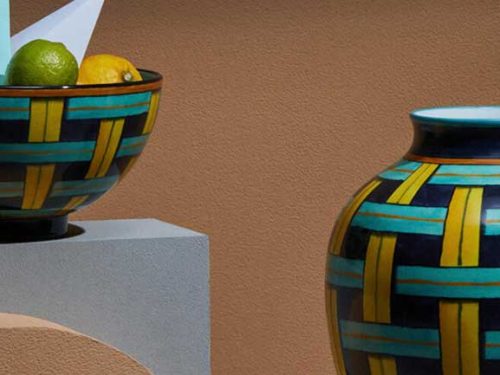 Ginori 1735: The History of Porcelain Art