“The art of living in crystal will seduce the whole world”

Born of a luminous ball of fire, the mystical union of sand and fire, and the breath of man, Saint Louis crystals vibrate with all the talent inherited from the past and extraordinary creative fantasy inspired by the present. This true combination of alchemy and dreams stems from the natural habitat that gave birth to the Crystal mastery: the forestry region of the Vosges in France.
This timber cathedral with its peaceful spirit is deeply tucked away in the its valley and is a fertile territory for silica sand, potash from ferns, firewood, and river water but also for myths, legends and imagination. Founded in 1586, the manufacture of Saint Louis crystal gave birth to an entire village built and developed around its glass guilds. In 1767, the highly regarded manufacturers were bestowed with royal warrants and with the name of Verrerie Royale de Saint-Louis, by Louis XV, for the exceptional quality of their glasswork.

Designed in 1928 and extremely popular to this day, the Tommy service made its brilliant showing in 1938 during a legendary royal lunch held in the Hall of Mirrors at the Versailles Palace to celebrate the State Visit of the British King George VI and his wife Queen Elizabeth, known to all as the Queen Mother. The dining table was laid with sets of eleven “Tommy” glasses for the over two hundred guests. This timeless collection that reflects all the essence and dexterity of the glass-masters of Saint-Louis is one of the most popular designs in glass art featuring starred feet, bevelled stems, and forms adorned with diamond cuts, ribbons and beading. 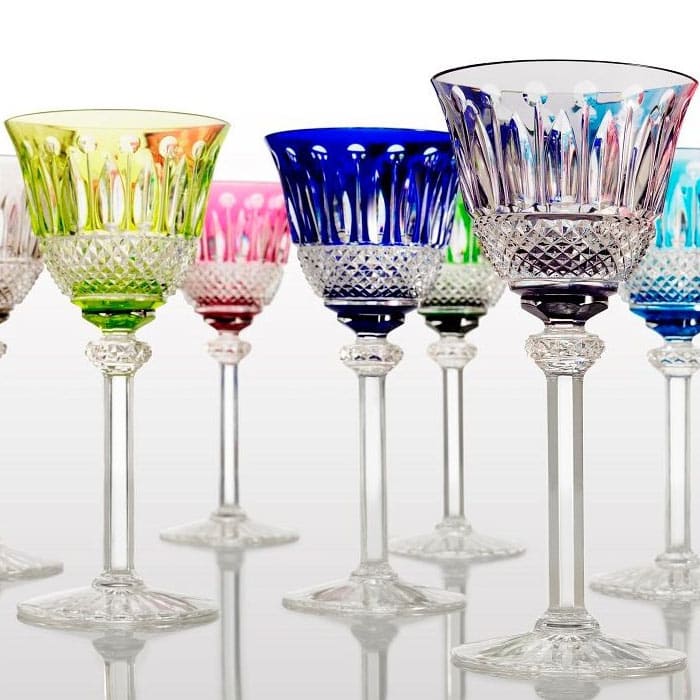 Born from the classic pattern of the Thistle collection, the Apollo line features a diaphanous and fascinating style. The fine engraving and flowing lines express with clarity, the essential liquid nature of crystal. The “Apollo” glasses are almost too nice to use. They have a striking vertical shape and can bear a 24-carat gold rim. When the refracted light falls onto the rhythm of the Venetian-style stripes and captivating chromatic palette, it becomes contemporary poetry with its dashing appearance.

In Greek and in Roman mythology Apollo was indeed the God of Light — it is no wonder, then, that a complete Saint Louis crystal product line should be named after him. Created in 1979, the “Apollo” design has a distinctive shape and an angular cut which reflects light in a multitude of different colours. No matter whether it be the “Apollo” stemware, whose broad bowls rest on delicate stems, or the bar glasses whose rims are contoured by a fine line of 24-carat gold: the Saint Louis “Apollo“ design always displays a very distinctive cut and brilliance. 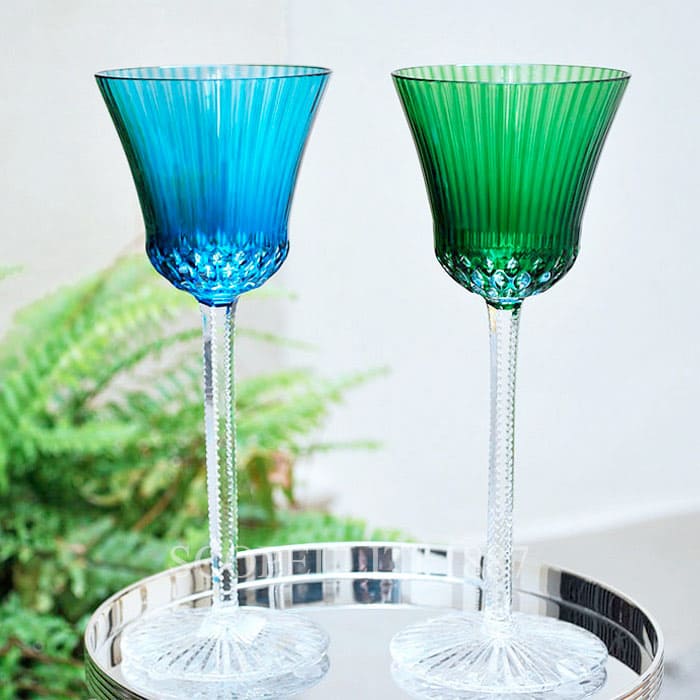 Simple lines and a balanced silhouette give Stella its modern airs and delicate harmony of form and essence. The unique cut of the glass fans out from the base of the glass and is brought out to maximum effect as it refracts the light into a thousand rays evoking angular shapes and nocturnal sparkling of stars. Hence this series, made using traditional mouth-blowing and hand-cutting techniques in the renowned French crystal glassworks of Saint-Louis, really does justice to its name “Stella”, the Latin word for a star. 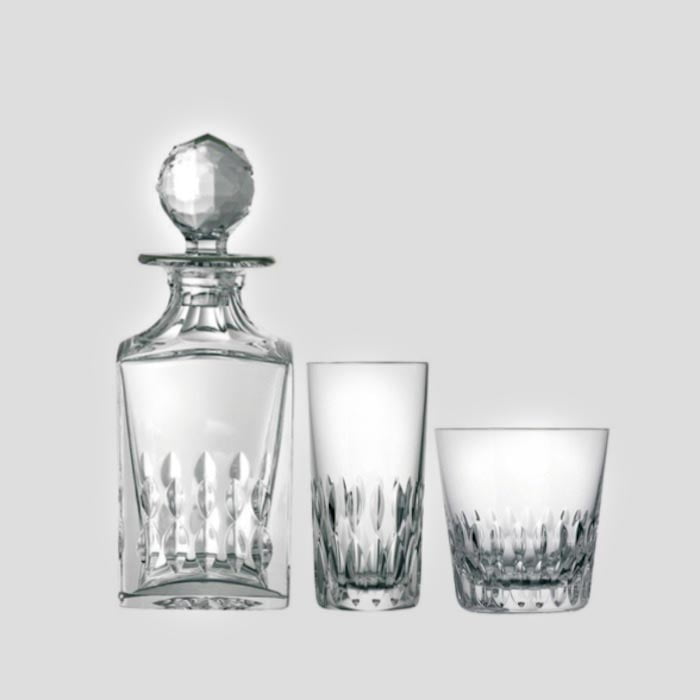 Crystal mainly differs from glass in the addition of up to 40 percent lead (in the form of lead oxide) to the silica glass recipe, which makes it much clearer and more desirable due to its decorative properties. The lead also lowers the metaling point of the glass, making it easier to sculpt into finer and more ornate shapes.

Note: Modern crystal drinking glasses now use other oxides rather than lead, though Cristalleries de Saint-Louis keeps its precise recipe a secret.

Like almost all artisanal products of very high quality, this traditional manufacturer experienced a great deal of adversity in the face of prevalent mass-production processes in the 1980s, and would have closed its doors had it not been for Hermès. In 1995, the French icon expanded its product repertoire by taking over 100 percent of what was by then called Cristalleries de Saint-Louis.