“BEAUTY WILL SAVE THE WORLD” – DOSTOEVSKY”

For two centuries, Herend porcelain creations have been exclusively hand-painted by more than 800 painters, using more than 1000 colours and around 400 different types of decorations, thus showing a remarkable artistic ability. They have come to symbolize beauty, elegance, style and they have become part of Europe’s Cultural Heritage. Having withstood the destructive power of time, they have managed to establish themselves as a reference point for eternal values.

The two-centuries-long story of the Factory has been accompanied by great accomplishments at World Exhibitions and by many prominent figures, thus paving the way for its worldwide reputation.

The Porcelain Museum of Herend, in Hungary, is visited by around 100.000 people every year. The museum allows its visitors to take a closer look at the secrets of porcelain manufacturing and it showcases, with remarkable historical accuracy, a collection of fine porcelain masterpieces from the last two centuries.

Apponyi, one Herend Porcelain Manufactory’s most renowned décors, was developed starting from the Fleur des Indes (Flowers of the Indies) décor. In the centre of the plate it is possible to see a motif in Chinese style: The Fleurs des Indes motif of a peony encompassed by leaves. A garland of stylized leaves runs all around the edge of the well and it is interrupted periodically by carved gilded rosettes. The ledge shows the contoured pattern of a flower surrounded by six leaves with a decoration of brilliant specks of gold.
The origin of this particular pattern can be traced back to Count Albert Apponyi, the original recipient of this simplified version of the Fleur des Indes. This pattern comes in several different shades, while the décor also comes in green. To paint, the artists at Herend also use shades such as purple, powder pink, green, orange, blue, yellow, lilac, maroon, black with gold lining, turquoise with a platinum thread or various combinations of colours. 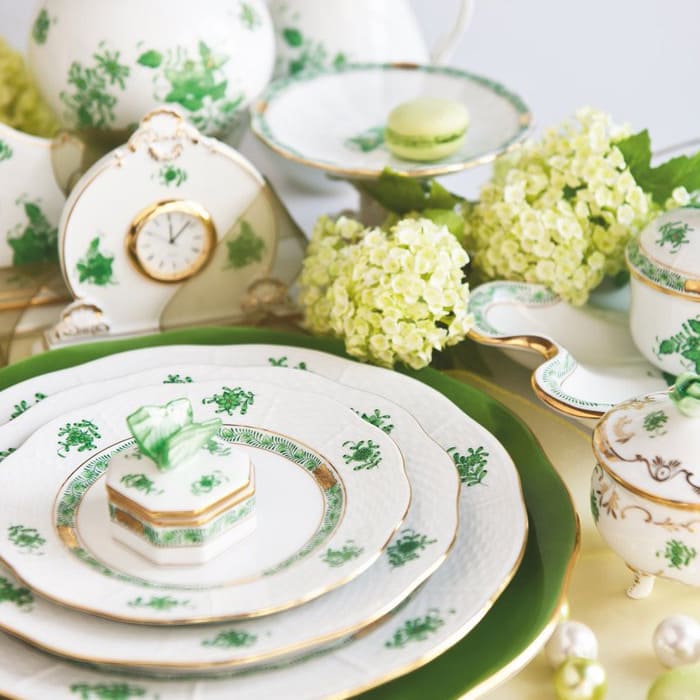 Rothschild Birds (Couple of Birds) is one of the most celebrated Herend décors and it takes its name from the incredibly wealthy Rothschild family. From the 1860s onwards, the many branches of the baronial Rothschild family have regularly ordered sets in this particular décor. The Bird Motif became popular in almost every European porcelain factory, where they also were inspiration of Love.
The RO model with a gilded rim comes in 12 variants of Birds. RO-ETB is perfected with a blue scale border. The predominant elements are two birds and a gold necklace, and they recall a notorious family story, according to which the two birds returned the precious lost necklace to the Rothschild family. Its name is one and the same with Wealth and Prosperity and the also represent, ever since the 1860s and as proved by the name of this décor, Herend’s best customers. In the perspective of life connoisseurs, this means finding physical and mental harmony – for which wealth is no drawback – and helping those with whom they share their lives to do the same. The second symbol is conveyed through the Birds, a timeless symbol of the love between man and woman. 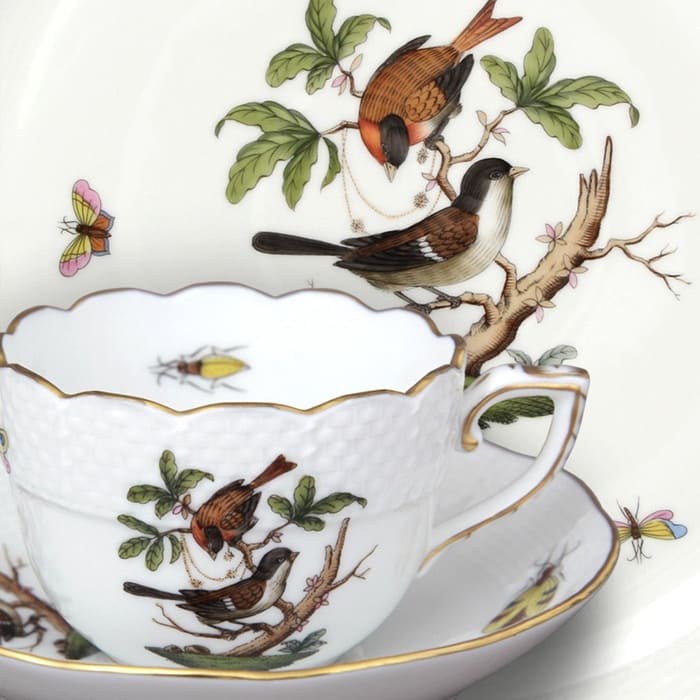 Queen Victoria of England, who gave the name to this décor, owned a complete table service made especially for her. The Victoria pieces, of late baroque shapes, come in shiny white porcelain, and are richly rimmed in green and gold, as they are colours which recall the fresh spring meadows. The motif, which was inspired by the festive Hungarian taste so popular at the time, is vividly illustrated in polychrome or monochrome enamels. It incorporates butterflies flying through magnolia branches, peonies and other exotic flowers.
The set of this pattern comprises different sizes serving and dessert plates, tea and coffee cups. It proves to be an exquisite assortment suitable for a refined and high-profile table. 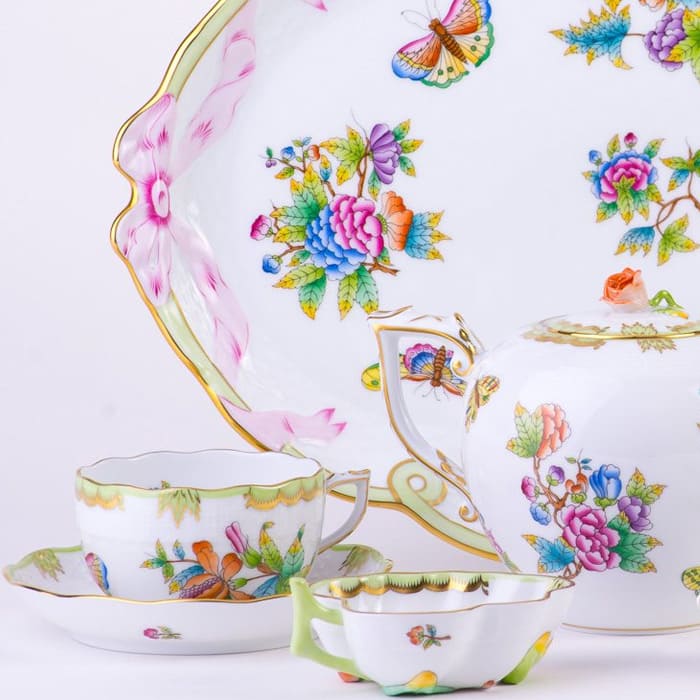 This decoration which, thanks to its small flowers, proves to be very romantic, is a renowned porcelain décor, characterized by its oriental style.
The Herend variant of the Milles Fleurs is simpler and airier, and it is accompanied by floral motifs dispersed across the surface of the snow-white porcelain, by gilded rims and sophisticated choices of colour. It offers dreamy brushstrokes in translucent blue and yellow, and purple petals with shades of red, in turn embraced by the green and pastel blue typical of the foliage. The painters of Herend, in Bakony Hills, have managed to portray the flowers all around them, making them come to life in genuine works of art, characterized by their likeliness and their beauty. 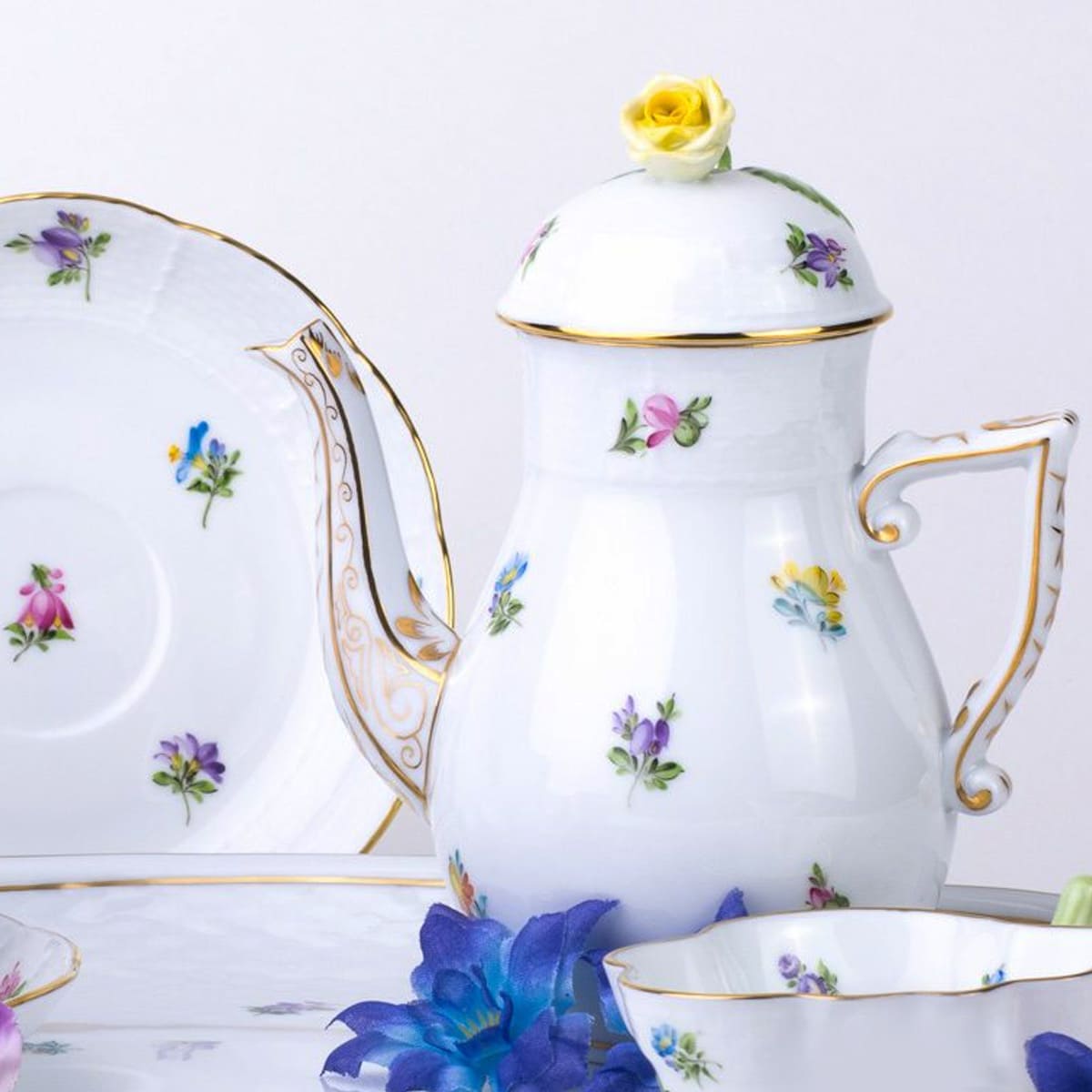 Viennese Rose Platinum décor is of the same age as the Herend Porcelain Manufactory. Thanks to the popularity of the stylised rose pattern, its variations were employed by several manufactories throughout the 19th century.
The origins of the Herend design are rooted in the Biedermeier period. Its green banded version with a central rose motif was commissioned by the Viennese Court.
The recently revamped design of the Viennese Rose now merges several of its variations. The scattered rosebuds, the enlarged central or the speckled smaller rose blossoms triumph in their own right on individual items. Placed next to each other, however, the very same elements form a harmonious whole, commemorating the ambiance of their ancestry. The refreshed Pastel hues of Vienna rose platinum further emphasize the coherence of the distinct motifs. Using platinum ornaments and light grey elements, it symbolizes elegance and modern luxury at once. 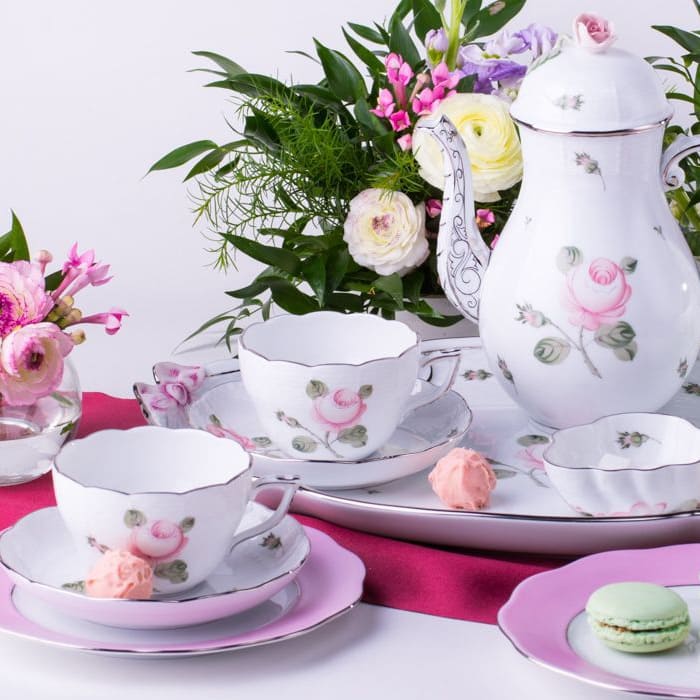 Most of the common applied Herend Porcelain Trademarks can be categorized in two basic groups. Trademarks before the communist government took ownership of the factory in 1948, and all other trademarks previously used.Many variations of trademarks used in both periods.
One distinct difference is the use of the crown on the top of the shield. Presence of the crown indicates date of manufacture 1948 or before. That is true with trademarks with or without the text around the shield.
Under the newer trademark on the right you can find the form number, then the pattern code and the date of manufacture.
The date code used commonly only from the 1990’s. It is on almost all new items.
From 1939 to 1948 many trademarks had the year incorporated in the mark itself. On newer items maybe a country code under the form number, and a painter number away from the trademark.
As a general rule a “HEREND” impression is present on the bottom of the item and a form number impressed also, even if in many cases hard to detect.

International recognition of the new technical and artistic endeavours came with a series of World Exhibitions starting in 1851. Herend goods received 1st class medals at The Crystal Palace in London.
That was also when Queen Victoria ordered a dinner service with a Chinese-style butterfly-and-flower pattern, which is known to the world as the Victoria décor and is to this very day one of the best loved Herend patterns.

Orders from distinguished clients and a whole series of gifts underscored aristocratic approval of Herend porcelain: Franz Joseph had his table laid with Herend porcelain, ordered a set for his wife, Queen Elisabeth, for her Gödöllő Mansion, Mór Fischer greeted the German naturalist and explorer Alexander von Humboldt with Herend porcelain on his birthday; we could also mention Empress Eugénie of France, Tsar Alexander II of Russia, the Shah of Iran, Count Rudolf Apponyi, Count Pál Esterházy or even the Barons Rothschild. He amassed a great many accolades, the most outstanding of which was probably being made a knight of the Franz Joseph Order, receiving the Officer’s Cross of the French Legion of Honour and being awarded a patent of Hungarian nobility entitling him to use the name Farkasházy.

The Herend porcelain manufacture was founded in 1826 in the homonymous Hungarian city near Lake Balaton. It immediately started to succeed, as it decided to immediately produce exclusively exquisite products. It was the period when porcelain had reached the peak of beauty with the renowned European manufactories, Capodimonte porcelain, Vienna, Meissen and Sevres. In 1851, on the occasion of the Universal Exposition in London, it obtained such a success, that even the Queen of England Victoria ordered her service of porcelain, butterflies and flowers, destined to become an icon of refinement, taste and elegance on the table, still in use at the English court. In the years that followed, Herend succeeded in producing porcelain services for Tsar Nicholas of Russia and almost all the world noble families. From 1914 to 1918, turnover fell to a minimum; most of the workers enlist and the factory just works. The period between the two wars was very difficult, even for the supply of the raw material, the kaolin. The post-war economic and political scenario in Hungary forced Herend to nationalize and direct mass production. But soon the leaders realized that Herend porcelain could provide the country with huge revenues and therefore, starting from the fifties, the production of the wonderful porcelain work that we admire today prevailed.

On July 1, 1992 the new company, Herendi Porcelàn Manufaktura Rt, was established, whose ownership structure, probably one of the reasons for its current success, is: 50% of the shares are owned by current and retired employees, 50% is owned by the workers’ union and the inalienable property of the Hungarian State. At present, the number of Herend factory employees exceeds 1600, including 250 turners and around 800 painters.

Who bought in te past Herend Porcelain Ware?

In 1851, at the first World’s Fair in London, Queen Victoria of Great Britain bought a large dinner set for the Windsor Castle. She chose a “Far-Eastern” pattern – now called Victoria Décor – that depicts colorful butterflies and peonies. With this pattern the Herend Porcelain Manufacture won the Grand Prix award. Herend porcelain ware became famous all around the world thanks to this décor.

In the 1850s, the members of the Baron Rothschild family fell in love with bird-patterned Herend porcelain ware, thus ordered a collection. The family was an important customer and patron of the manufacture. In honor of the family, the bird pattern – the birds symbolize love and relationships – was named Rothschild décor in 1861.

Count Albert Apponyi (1846-1933) also loved Herend porcelain ware, and a décor was named after him as well. Apponyi Décor is a unicolor floral pattern in green, pink, blue or other colors.

Franz Joseph I of Austria

The Emperor loved simple patterns like the Laurel Garland Décor. A dinner set of this pattern were used by him in the Buda Castle.

The wife of the Emperor, Empress Elisabeth of Austria, also loved Herend porcelain ware. She used a set with a chinoiserie pattern (Siang Rouge Décor) in her Gödöllő Castle which later was named Gödöllő Pattern after the city.

Princess of Wales Lady Diana chose a set with Rothschild décor for her wedding.

Austrian-born actor and former governor of California Arnold Schwarzenegger likes Herend. He is a big collector of VH animal figures.